Nicholas Cage has sold his castle, Schloss Neidstein, to his local German advisor, lawyer Konrad Wilfurth, according to the regional daily newspaper Mittelbayerische Zeitung. He has sold several proeprtiues to pay a tax bill.
July 2006, in a move inspired by the German roots of his mother, Joy Vogelsang. At the time, he fell in love with the half-timbered centuries old structure saying, “I liked the architecture and the gigantic forest.” He envisioned a homey residence for himself, wife Alice Kim Cage, 25, and son Kal-El, 3.

According to the newspaper, Cage renovated the exterior of Schloss Neidstein, a 28-room castle perched on a hill in the middle of 395 acres of forest. “But since the exterior renovation, nothing more has happened,” castle caretaker Heinz Breitfelder told the newspaper. 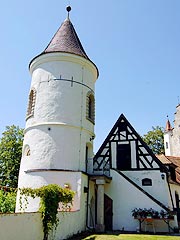 The new owner, Wilfurth, added that “the original plan for the Neidstein-Project turned out not to be feasible.”

Cage last visited his German castle nearly one year ago, in May 2008, when he swooped in by helicopter. He still has another castle, Midford Castle, near Bath, England, which he bought in July 2007. He recently began renovating that property, too.